Back to the office after Christmas 🏢 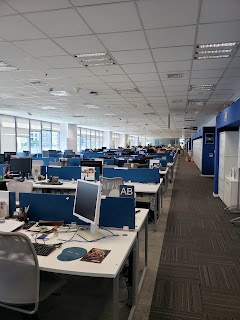 I am one of the lucky ones that has a bit of time off work between Christmas and New Year’s Day. It is all well and good but there are two first world problems that I dread when coming back in to the office. Firstly one being actually coming back to the office after having a bit of paid time off and the second being all the irritating conversations you get asked a million times a day by everybody you bump all with the same theme about what you got up to and “did you have a good Christmas”!

I don’t know about you but the first few times you are asked are not at all testing and in fact it was nice to have a chat with somebody other than my household for a change, when the same question is asked in quick succession on the other hand, oh boy does it get tiring.

I think the worst incident of this so far has been talking to somebody in a small office. This office might as well be a broom cupboard so anybody occupying the room can hear everything said. So when you finish your pointless Christmas chit chat to then be asked the exact same question from the second occupant right after you have finished talking to the first is blood boiling. REALLY! did you not hear what I just said? is it really that imperative that you have an identical conversation just for the sake of it when all you had to do was join in a little with the other person or just fucking listen! No, no, no, could not kill two bird with one stone and save me not looking like a dick head repeating everything I just said!

Day one back at the office complete. I kept my cool and reluctantly kept on answering the same pissing question repeatedly with the same response all day. I really did try to be polite to everybody, even at the end of the day when I was tired and all worked out. “It will be OK” I thought to myself, once it is all out of the way and people have asked finally everybody they can find that will be the end of it until next year right?

I was wrong, terribly wrong.

Jump to the second working day back after the Christmas break, who is that on reception? Oh yes it is the other part time receptionist “Morning Mr ManOfTheInternet, did you have a good Christmas”. I felt a twitch above my right eye, my blood pressure build up in every vain and the familiar feeling of dread overtake my body. I thought to myself I would let them off this once it is the first day back for them this will be the only person today surely… WRONG.

This small talk filled hell carried on for the next few days, the more it happens the less and less approachable I became and my longing for remote working to be enforced once more became stronger to the point where I tried to find a good reason not to be in the office. I thought being in my own teams’ office would allow me to hide away from my inquisitive staff as I became a self-imposed hermit, but this was sadly not the case due to that fancy new-fangled invention of the telephone. During my phone calls at some point that same question will rear its ugly well-wishing head much to my detest leading me to try and find a way to get out of the call as quickly as possible to insure that I do not “act unprofessional” shall we say and then need to have a “friendly chat with HR” followed by a totally random training session…

If you commonly suffer the same fate that I did this year or just generally hate people let me offer you a wonderful life hack, book January off in its entirety as annual leave then you will never have to deal with it again just make sure you get in there quick for next year, mine is already booked and I’m pretty sure Janet from Marketing is doing the same so there will be limited availability… 2032’s year starts in February.