I am the onion king! 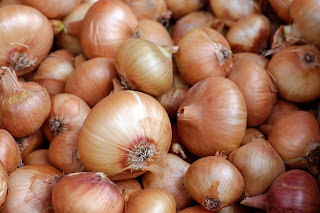 All must bow down before I, your new king, the onion king!

After many hours working in the garden this Spring I finally decided that I wanted to be that one guy that grows his own veg in the back garden. Taking inspiration from the soft voice of Monty Don on the BBC’s Gardener’s World and those perfectly maintained designer looking veg patches on Instagram this winter I thought yep that’s what I’m going to do. I BE VEG MAN NOW.

So in the tail end of winter I brought out the spade and broke ground. When I say broke ground I really mean I broke myself, digging semi frozen ground is not as easy as I thought it would be. There I was thinking that all soil was loose fluffy stuff not the mega compacted devil soil which has never been touched by us or the previous owners of this house or the for what I have now determined the whole human history! But there is good news to come out of all this hardship, my sore back and after copious amount of swearing that would make even a gathering sailors blush, it was complete. Now what?

Naturally slacking off for a bit because it was cold outside and I’m a weak willed man I left the garden to its own devices. But then, as if I could not see it coming, Spring rapidly sprung around the corner it was time for action. From my extensive research and training that consisted of a few evening on the internet I knew it was time to go seed hunting. I merrily went off and grabbed a few seeds ranging from carrots and peas to two onion sets. We’ll be focusing on the onions from now onwards. I planted meticulously what I though was the right amount but I was still left with half a packet still remaining. The choices that came next was what ultimately lead to my ascension to onion royalty.

So yeah, I just planted all of them, just because they were there what else was I going to do with them? Surly not all of them would grow and some would die because this was the first time that I have ever grown onions… Yeah turned out that every single one has grown even the odd looking squished one which I planted purely out of mercy rather than ending its opportunity on the compost heap. There are uncountable amounts of thick leaves flopping all over the place and massive bulbous red and white onions bursting from the ground, it looks like a bloody jungle out there! Where is my machete to cut through the undergrowth, I wonder if there is some long lost tribe of people in here? How much will my eyes hurt then I cut these onions?

As I’m typing this up now in a midsummer heatwave looking over my onion horde in the warm yellow evening sun cold pint in hand I can’t help but feel an overwhelming sense of pride of what I have managed to achieve.

I AM THE ONION KING…